The City of Leeds is very excited that the Grand River Drive-In will open Wednesday, July 3, 2019, just in time for the Fourth of July holiday celebrations.

Chris Strange, VP of Retail Operations at the Shops of Grand River, and Hunter Lake, developer and former owner of Avondale Brewing Co., have created a new mixed-use concept on the property adjacent to the drive-in called The Backyard. This team has worked to bring a Saw’s BBQ to the location, along with a new brew pub concept called Neighbors, both of which will open later this year. A third restaurant will be added, but that information has not yet been released.

The Backyard at Leeds

The concept behind the new name, The Backyard, is to support friendship and community. People can enjoy outdoor entertainment together, build friendships and family connections. There is literally a good, old-fashioned backyard that includes an area for live performances, a beer garden, mini-golf, yard games and a shaded area for guests to sit down, hang out, play bocce ball, shuffle-board, corn hole and enjoy live music. Astro turf has been installed, new trees have been planted and shipping containers are going to be added with decking so guests can lounge in the Backyard, with the option of renting out the containers for private cookouts and gatherings.

The 18-hole mini-golf has been updated, the children’s playground has relocated with upgrades and a new off-leash dog park has been added. Opening later in the summer, the Snack Shack, a new concession stand for the Drive-In will be closer to the theater lots for the convenience of movie-goers. People will be able to purchase concessions without having to come back to the restaurants. 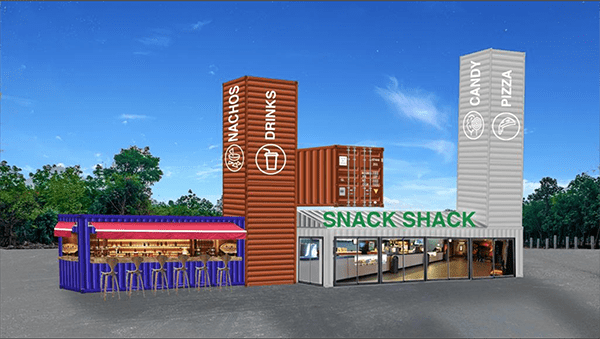 The Council will meet on Monday morning in a special called meeting to consider the approval of an alcohol license for a 30-day summer event, Neighbors Summer Fest. A license existed with the previous owners, but the vote on Monday is to grant a license to the new owners. This step will benefit the mall by increasing traffic and it will benefit the City with sales tax revenue.

Part of the first phase is still under construction, plus there are many exciting plans that are in the works which will add to the shopping and entertainment destination that has been created. The second phase will expand the performance area to an amphitheater and much, much more. The developers are hoping to work with the city to include a canoe drop in and kayaking spots on the Cahaba River along with an observation deck on the river bank.

“We heard the Leeds community. They wanted the drive-in to re-open. We are excited to bring that asset back to the community and hope that movie-goers will be excited about the things to come,” said Clay Greene, Marketing & Publicity Director for The Backyard at Leeds.